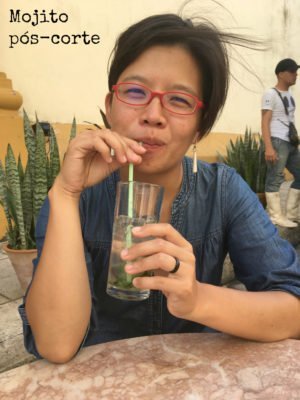 I walked in a little shy. If I could absorb some of the confidence that those gorgeous women in the posters on the wall were lavishing, I would never have self-esteem problems again. I stood quietly there for a while, half bashful, half waiting to be approached, as usually happens when one is the client. I was hoping someone would come and talk to me, ask me what brought me there, how they could be of assistance. Nothing happened. Both the clients, one waiting for the hair dye to dry, the other with her locks in the blow dryer, looked at me. The guy who was drying her hair too, but he pretended he didn’t. This is going to be interesting, I thought.

A few seconds later, the young man who came in caught my eye. He wore the white, rubber boots of a butcher, a long-sleeve blue shirt (the oppressive heat outside didn’t seem to bother him), and jeans punched into his boots. He was also wearing a cap turned backward, with some of his blond hair stuck in front of his eyes, blocking his sight, which distressed me just a bit.

He came through the door and headed straight to the back of the room, which made me think that, even not looking like a hairstylist, he worked there.

After a few good minutes being ignored, I put on the best shameless version of myself, which sometimes gives the air of grace, and asked, “do you do haircuts here?” The young man holding the hair blower once again pretended he didn’t hear me. I asked again, louder to get past the noise barrier, not knowing exactly who I was talking to. At last, he decided to babble a few words: “that’s your man, you can talk to him”, and pointed with his chin to the young man in the cap.

The young man in white boots came towards me. Huh, the butcher is really the hairdresser. Unlike his colleague, he was very nice and told me that he was just passing by, that he worked there on Saturdays only. It was Thursday. “When would you like to have it cut?” “I’m leaving Cuba tomorrow,” I said, somewhat resigned and hopeless. The reaction came quickly, to my surprise. “Okay, wait a minute. I will do it today.”

I waited happily. More at ease in the room, I realized that I liked the music that was playing on the radio, with dramatic lyrics of love and one of those catchy melodies. It was not long before I started humming.

I explained how I wanted it cut, “I just want to trim the ends. You can use the clippers in back, as I like it very short.” “Dale, dale,” was all he would say. I took off my glasses so they wouldn’t disturb the scissors. Short-sighted as I am, I could only see a blur in the mirror and wondered if it was right decision to trust my hair so blindly to someone I didn’t know.

I was wondering why it was taking him so long to turn the clippers on, until I realized there weren’t any. He did everything with the scissors. Click, click, click, man, when was the last time I had scissors working so close to me at such a frantic pace?

Someone came in and asked if he could cut her hair later. “No, I only work here on Saturdays! I’m just doing Christiane’s because she’s from Brazil and she’s leaving tomorrow. ” Being a tourist  brought me privileges with the hairdresser in Camagüey too.

Thirty minutes later, the click, click, click ended. Soon I felt a brush on the back of my neck and on my ears, which almost didn’t help at all to remove the hair, as usual. Anxiously, I put on my glasses and smiled.

It took him a while to come back and hand me five 1 CUC bills – the equivalent of about US$ 5 – and others bills that totaled 75 CUP. “Here in Cuba, we are always doing math. We’re good at it! “He said, with some pride. He assured me that I could use Cuban pesos even being a tourist.

I left the room singing the music of the radio, with a new hair style, renewed confidence and glad to have, for the first time in two weeks in Cuba, some Cuban pesos that would give me the illusion that, for my last 24 hours in the island, I could feel more Cuban than tourist.