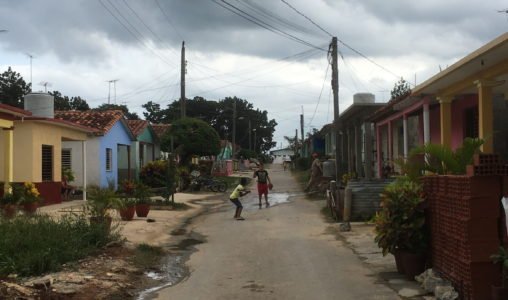 Click on photo to see more pictures of Cuba

We arrived in a small town west of Havana called Viñales after a very hot taxi ride with some Spaniards from Barcelona. That morning, before the trip, we spent a couple hours with Lupita, a friend of Simone’s, getting soaked in the rain on our way to see the Plaza de la Revolución. If we hadn’t been so pressed for time to make it to Viñales, we would have stayed in the store where we were taking refuge from the storm. It is a government store that provides the monthly rations for Cubans (every Cuban gets a certain amount of rice, beans, sugar, coffee, meat, butter, oil, the essentials). I asked if I could take a photo but the woman said no as then the world would know of Cuban’s misery… so we left and got soaked to the bone, Havana is known for its rain.
As soon as we finally got in Viñales, the first thing we saw was one of the few things I really wanted to see: kids playing baseball in the street!
After hanging up our clothes to dry, we went and ate another monstrous and delicious meal of meat. Chris had ropa vieja – pulled pork in tomato sauce – and I had a chicken steak, all with rice, beans and veggies, with mojitos, of course. Upon returning to the casa particular, we were both tired and hung out in the rocking chairs on the back porch watching the neighborhood chickens and chicks running around, quite a few neighbors and buzzards overhead. Chris soon passed out and the workers building the house next door invited me over to drink their rum with them! We spent the next hour drinking heavily, laughing lots, and sharing cultural similarities and differences. They were very interested that I was from the country and had built my own house. They wanted to know all about Chris. And, like everyone, they talked about how little money they make and that is why they can’t travel.
They said more than once they had seen innumerable tourists in the house we’re staying in and that I was the first one they had ever spoken to. We drank the run “bronco”, or straight, out of plastic cups, well, they made me drink out of glass, as the foreigner. I thought it was smooth, but they said it was so-so. Alabao rum is made in the closest city, Pinar del Rio.
We came on a visa known as People to People, and I think today just epitomized that sentiment!
Chris came out wondering where I was and of course they invited my Mrs. over! She didn’t want any rum, but she did actually get a tour of the house, as I never even left the porch!
I can’t tell you how many times I was touched in our rum session? On the arm, the hand, the shoulder, the leg, at one point a guy grabbed my head and brought it down to his forehead (just like Queequeg did with Ishmael, it is quite intimate.) So many young guys walked around the festival with their hand on their friends’ shoulder. Simone’s friend Lupita grabbed Chris’s hand when we were crossing the street. This is such a welcoming and affectionate culture!
After saying our goodbyes, Chris and I walked downtown to use the internet (which is only available in plazas with a card purchased from the national telecommunications company for over $2/hr. It is quite a sight to see the plazas filled with people staring at their phones or shouting at broken images of loved ones.) The first thing we noticed was a cop car blocking the street. When we got to the main plaza, it was all set up to celebrate the 40th anniversary of the signing of he revolution’s constitution, Oct. 31, 1976. The plaza was packed!
It was amazing to hear the rhetoric. After a week in Cuba, we had seen a lot of government propaganda, but to hear the song dedicated to Fidel, the shouts of “Viva!” in chorus: “Viva Che”, “Viva Fidel y Raúl”, “Viva la revolución!” It gave me goosebumps.
By Nate| 2016-12-20T04:58:57-02:00 29 de outubro de 2016|