Our introduction to Mexico City 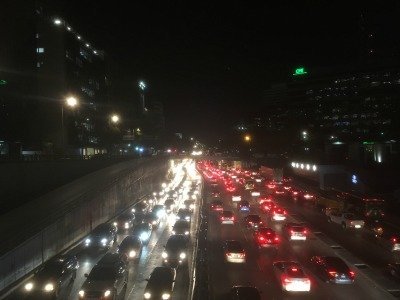 On the way into Mexico City on Saturday, we unwittingly were breaking the law with a foreign license plate. The pollution is so bad there are days you can’t drive your car depending on the final number or letter of your license plate.
We were told by friends that the State of Mexico (which you have to pass through to get the the capital from the north) have cops that are super corrupt. Within a couple kilometers of the border with the capital, we were passed by a cop car and pulled over with a hand gesture as they drive with their lights on all the time. He explained the laws (showing us in “his book”), he then took my license and said we had to go to the police station, or be towed, and pay a $200+ fine and leave it until Monday. Or, we could pay now and he would give us a code that would explain to other officers what had happened. We didn’t have $200 cash, so he said we could pay half and that would be fine. When he came back to the car I started to hand him the cash and he said: “no, for the love of God, keep it down, put in the book where you’ll find your license and the code.” It was only at this point that I realized what we were dealing with. The code was hand written on the back of a hairdresser’s card.
After paying over a $100 bribe to the first officer, we were stopped again within a kilometer, but the hand written note he gave us got us off. We were stopped again 5 km later by a motorcycle cop, again waved over by hand. He said good afternoon, shook my hand, introduced himself and explained the law about foreign vehicles on Saturday. We duly showed him the card, but he said we were in a different district, so that code was no longer valid. He went off about being towed to the police station, the fine, holding it until Monday, the same bit. We explained how we already paid, that we no longer had that much cash. He then asked how much we had, which totaled about ten dollars with all our change. Chris then said we had Brazilian Reais and he seemed to think that was ok. So he gave us his glove, which I filled with Mexican Peso coins and Brazilian Reais. He gave us another hand written “code”, this time on a florescent green teddy bear sticky note.
We stayed where we were pulled over to try and collect ourselves and the janitor of the mattress store where we were came and told us we shouldn’t pay anything. In the meantime another motorcycle cop came and told us about the free online paperwork we needed to legally drive on Saturdays.
We left and 200 meters later we were stopped a fifth time. We explained he whole situation again, showed him the two pieces of paper and his response was to say that I looked like I was pretty sick of the whole thing (which was the understatement of the year) and then proceeded to ask us what we were going to do. After asking another two times “what are we going to do?”, he realized we literally didn’t have any more cash. This guy then gave us a third code, wished us a good afternoon and we finally made it into the City of Mexico proper, not the state of Mexico, and we were never stopped again.
To top it all off, we couldn’t shut our car off, the last time we did at a gas station, it didn’t start. We had to push start it and leave it running every time we were pulled over. We now have a new battery, made it to stay with amazing new friends and built a bed to sleep in the back of the car. All’s well that ends well, but wow, what an adventurous experience!
By Nate| 2017-01-29T15:08:55+00:00 29 de janeiro de 2017|